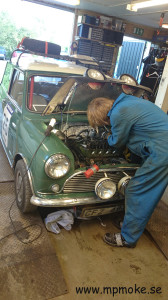 Pic1: My son was home for summer so he helped out in the garage.

I had some problems with the Austin Mini Cooper -62, it was loosing power and didnt run as good as normal, it was hesitating and acted lame. I took the spark plugs out and the two in the middle was absolutely black while the two outermost were normal. Time to go topless! 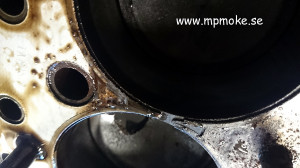 Pic2: quite easy to see that the head gasket is broken, between cylinder 2 and three, of course.

I drove the Mini to the garage and with the help of my son I pulled the head off the engine. It was quite easy to see the blown headgasket, between cylinder two and three of course. It was some cheap headgasket mounted so now I took a copper gasket and treated it with shellack. At the same time I brushed off the head, 12G940. Everything was mounted, torqued and valve clearance was set according to the manual. After some petrol was pumped in, it started!

I have now driven it for some days, there still adjustments to do, set the valve clearance, adjust ignition, clean out the SU-carburettor and add some oil in the pot. But all together it was a sucessful operation and hopefully the Mini will now run the whole summer.