We woke up in Hungenbach, just outside Kürten after a good sleep .
Breakfast was great, a nice buffet and the owners started a fire in the huge fireplace. We had a chance to see the place in daylight. It was an old farm with a water mill. The houses were from 1800 something, relocated to this place. They had several animals like dogs, deers, horses and a loud rooster.
Cooper adjustments had to be done, it was a loose clamp on exhaust pipe under the middle of the car. Joel place the car on an improvised repair place so Micke had easy access under the car to tighten the clamp .
We then took off and found the way to Rösrath. There we spotted a Volvo Amazon and a Mini parked along the street and of course we had to stop for a photo.
We drove towards Köln, avoided Motorway 4 and found road 3 heading south.
Outside Koblenz we stopped for petrol, it was well needed as we could fill 23,3 liters in the Cooper, the tank has room for 25 liters of petrol!
We drove on towards Frankfurt Hahn airport, turned west towards Einchen and drove nice roads into the sunny Mosel valley.
We stopped in lovely Bernkastel-Kues for a late, but very nice lunch. I had schnitzel with white wine to drink.
Thomas made some small adjustments on the Volvo Amazon, it had a bit smoky exhaust so the crankhouse ventilation was disconnected from the airfilterbox on carburettor and led into a bottle, we’ll see if that’s helps.
One of the Com radios ran out of battery but Joel had brought an extra so we could still communicate between the cars , very handy to update map readings and other quick messages.
It was now late afternoon and we had no booking for the night, in the stress we (read Micke) ended up booking two hotels, one in Metz and one outside Thionville, of course none could be cancelled witout a fee …..
We now drove south before we found a road getting us out of valley and up on the highway and then into a smaller road that suddenly took us over the border. In this area in one of the strongholds for the Maginot line, the defense line from ww2, that also was used during the cold war. Today many parts are museum.
Marika guided us to Kedange where we eventually found the hotel for the night. Sleepy hotel with a restaurant and bar, the only facilities in the sleepy village. We took a walk, had a beer before they closed and then went to sleep in our studio with two rooms, bathroom and a kitchenette. 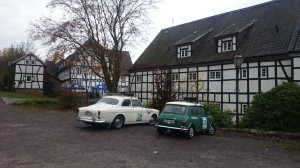 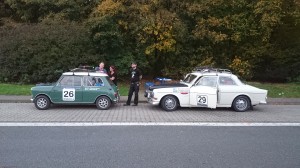 So after a week in Germany with work related activities it was time for start of vacation and to take part in the November Sun Run.
This lovely saturday morning I woke up in Hamburg and the Swedish teams arrived with ferry to Kiel from Gothenburg. It was Marika and Thomas in the Volvo Amazon -70 and Joel driving my Cooper -62.
I sent my coordinates and shirtly after lunch they arrived to the intersection of road 431 and Notkestrasse in western parts of Hamburg , just some blocks from DESY which I had visited.
The cars was running fine and the crews looked happy. They were a bit late due to some adjustments done to the Cooper.. The flasher relay was a bit faulty and had tried to solve it without success. Now it is manual turn signal, on off on off on off…
We filled petrol and headed out on Autobahn, in the chaotic german traffic. Through the Elbe tunnel and then there was a road construction work where we took wrong exit… We ended up on the road going southeast. Short stop, discussion and map reading and then we headed off again. A bit more on this road and then a connecting road to the west so we got back on road 1 towards Bremen.
Stop for lunch at a roadside restaurant, rasthof, was well needed as we all began to loose focus.
We drove on, stopped for petrol outside Osnabrück and drove on again.
Time was now about 17.30 and sun set and it began to be a bit dark.
We passed Hagen and found the exit we had looking for, just to the east of Köln. We were aiming for a small village called Kürten and instead of following instructions we took a shortcut… Very small, twisty roads, up and down, a real practise for the upcoming rally. The auxiliary light came to use as it was a bit dark. Would have been great to try these roads daytime as well.
After some exploring of local streets we finally found our hotel for the night, Hungenbach hof. Nice old houses, restaurant and a spa in the basement where we ended up with some beers before the beds were calling for us. Zzz..